When it comes to broadband in the home and in the office, speed is one of the most important things for many people. It can be so frustrating when your favourite shows or movies freeze or buffer every few minutes.

Downloading large files simply is not feasible in many cases. And it is not just movie watchers streaming who suffer: poor broadband connection speeds take the fun out of gaming without a car being raced or a single mission being completed..

Unfortunately, Ireland’s current infrastructure means that broadband speeds vary a lot depending on your internet service provider, where you live, and several other factors.

In many cases, improvements to speed can be made. So what can you do when you want to identify the problems and fix them?

One of the first steps you can take is to check what your connections speeds actually are. There are many online speed test tools designed to help you do this

But speed test tools have a problem: they all return such different scores!

In many cases, this makes matters more confusing. How do you know which scores to trust? Why they are so different?

The page you are reading right now is designed to show you a number of reliable free third party broadband speed test checkers;

We did the research, so you do not have to. Here they are:

Measurement Lab is a global technology organization. It was founded by pioneers in Google, Princeton University’s PlanetLab and other internet stakeholders. It is dedicated to the open measurement of the internet through reliable, independent data. 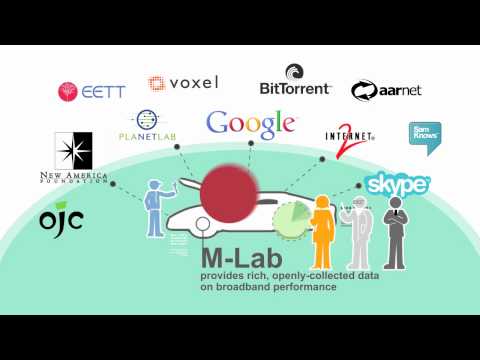 Measurement Lab provides an open platform for researchers and other interested parties wanting to create and use internet measurement tools. This includes advanced data and around internet speeds and broadband speed in particular.

There is no ‘website’ or page on the internet which the Google version of this lives on. Unlike others in the list on this page, you need to perform a search in Google.

Just search ‘internet speed test’ and you should see this:

Hit the blue ‘Run Speed Test’ button and your test will run.

If this does not work, navigate here to open the MLab Speed Tool support documentation.

Ookla is another global leader in broadband performance analysis and intelligence.

It’s broadband speed test tool is one of the world's most respected. Ookla explains on its official website that its testing tool is “the most accurate way to measure internet performance as well as network diagnostics.”The company’s headquarters are situated in Seattle over in the US.  They have additional offices in Memphis, Tennessee and a European office in Dublin, Ireland.

This broadband speed testing tool is very useful for people in Ireland who need speeds which enable streaming. The service is provided by Netflix, the streaming service. The test is compatible as a broadband speed diagnostic tool with thousands of internet-connected devices.

The tool provides a very fast measurement of your broadband download speed.  There is an option to find “more information” once the test has been run. The extra information includes upload speeds and latency. Finally, there is an app to measure Android and IOS devices.

Speedof.me was created at the end of 2011. Website owners claim that their broadband speed test checker was the first HTML5 broadband online speed test tool. HTML5 speed test checkers are preferable to Flash based solutions in many cases because they make use of key technology in the browser. Because they do not rely on other plugin based technologies, download, upload, and latency measurements are more accurate.

The tool has a simple and impressive user interface. Speedof.me has servers in London, Paris, and many others worldwide, but none in Ireland.

This broadband speed testing tool was developed in 1996. It has therefore been available and providing broadband speed test services for longer than any of the other tools on this list. The speed checker is very user-friendly and it works in most of the commonly used web browsers.

It is a HTML5 tool and does not require Java plugins to operate. This means that TestMy.Net produces more accurate scores and measurements.

An attractive feature of this tool is its benchmarking data. It is possible to compare the broadband speed results you get with similar users in your vicinity, or other customers using the same internet service provider.

Bandwidth Place Is a US based website dedicated to broadband information. This includes:

The speed test evaluation tool on the site is visually appealing and very easy to use:

MegaPath is a Fusion company founded in 1996, and based in California. The company is a telecommunications business focusing on high growth cloud and integrated communications services. The group offers a free broadband speed testing tool.

This is a website dedicated to Ireland home broadband services. The site is a comparison site. It helps consumers in Ireland to find and evaluate broadband internet packages. The site includes a range of different providers.

The site also contains a broadband speed checking tool which can be used for free online.

TechRadar is a UK based IT website with a speed test tool focusing on specific international markets. It has editorial teams in offices within the United Kingdom, the United States, Australia and India. The main focus of the website is to give news and independent reviews for technical products such as:

The site has recently developed and released an online broadband speed testing tool.

It has an established and reliable broadband speed testing tool. Like the other tools in this list, it is freely available online.

Vodafone Ireland has its own speed test tool.

We commissioned this tool with Ookla to provide a number of things:

The tool is simple to use and freely available online.

The information provided is typically very up-to-date and easy to read. on their website they have developed a broadband speed checker.

This company provides both an App and a website. Both tools help people measure their broadband speeds. The developers have been in the internet speed testing space since 2001 and have a good reputation.

As you can see from the list above, there is a wide range of speed testing tools. There are several excellent options which are completely free to use and which return good results. Depending on how you are intending to use your broadband at home, some tools may be more suitable for you. For example, if you intend to stream movies frequently, then Netflix’s Fast tool will be a good tool for you to consult.

On the other hand, if you browse predominantly local static websites then you will want to check out the tools with local servers.

These tools are best used in two specific ways. Firstly, use a range of tools to find patterms rather than relying on speed test results from one tool. If four of the tools on this list are all saying that your upload speeds are slow, for example, then this is a clear pattern you can act on. Secondly, compare results from the same tool over time. You might find that differences occur at specific times of the day or at weekends. Again, this is important information you can track and act on.